Stereopsis refers to our ability to appreciate depth, that is the ability to distinguish the relative distance of objects with an apparent physical displacement between the objects. It is possible to appreciate the relative location of objects using one eye (monocular cues). However, it is the lateral displacement of the eyes that provides two slightly different views of the same object (disparate images) and allow acute stereoscopic depth discrimination.

Relative Size: Retinal image size allow us to judge distance based on our past and present experience and familiarity with similar objects. As the car drives away, the retinal image becomes smaller and smaller. We interpret this as the car getting further and further away. This is referred to as size constancy. A retinal image of a small car is also interpreted as a distant car (figure 1). 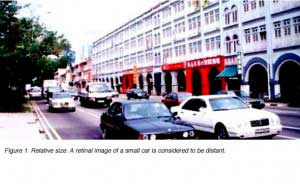 Interposition: Interposition cues occur when there is overlapping of objects. The overlapped object is considered further away (figure 2). 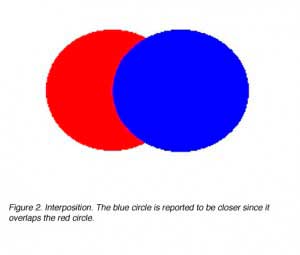 Linear Perspective: When objects of known distance subtend a smaller and smaller angle, it is interpreted as being further away. Parallel lines converge with increasing distance such as roads, railway lines, electric wires, etc (figure 3). 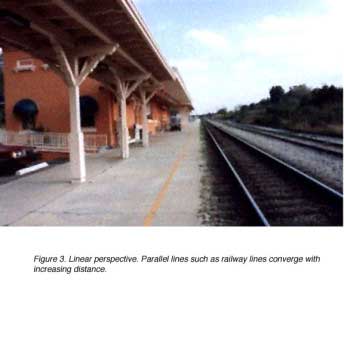 Aerial Perspective: Relative colour of objects give us some clues to their distance. Due to the scattering of blue light in the atmosphere, creating “wall” of blue light, distance objects appear more blue (figure 4). Thus distant mountains appear blue. Contrast of objects also provide clues to their distance. When the scattering of light blurs the outlines of objects, the object is perceived as distant. Mountains are perceived to be closer when the atmosphere is clear. 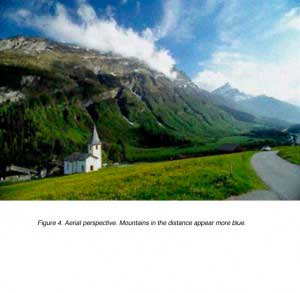 Light And Shade: Highlights and shadows can provide information about an object’s dimensions and depth (figure 5). Because our visual system assumes the light comes from above, a totally different perception is obtained if the image is viewed upside down. 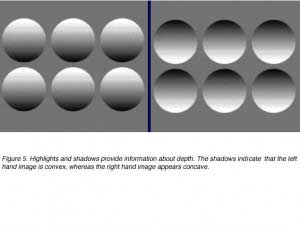 Fusion describes the neural process that brings the retinal images in the two eyes to form one single image. Fusion occurs to allow single binocular vision. Fusion takes place when the objects are the same. When the objects are different, suppression, superimposition or binocular (“retinal”) rivalry may occurs. Suppression occurs to eliminate one image to prevent confusion. Superimposition results in one image presented on top of the other image. Binocular rivalry describes alternating suppression of the two eyes resulting in alternating perception of the two images. This usually occurs when lines are presented to the two eyes differ in orientation, length or thickness. An example of binocular rivalry occurs when one eye is presented with a horizontal line and the other eye is presented with a vertical line. Binocular rivalry occurs at the intersection of the lines and some suppression also exists (figure 6) 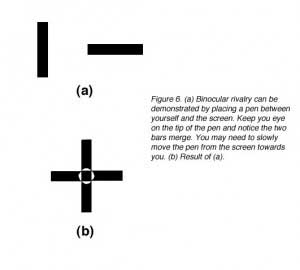 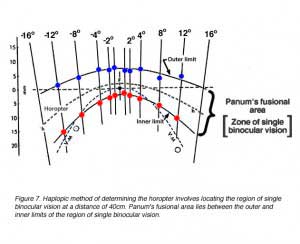 There are two groups of clinical tests used to measure stereopsis. These are the contour stereotests and the random-dot stereotest. Random-dot stereograms were first used by Julesz (1960) to eliminate monocular cues. As there are no contours, depth perception (stereopsis) can only be appreciated when binocular fusion occurs. Two process of stereopsis are used and these are local and global stereopsis. Local stereopsis exists to evaluate the two horizontally disparate stimuli. This process is sufficient for contour stereotests. Global stereopsis is required in random-dot stereogram when the evaluation and correlation of corresponding points and disparate points are needed over a large retinal area. 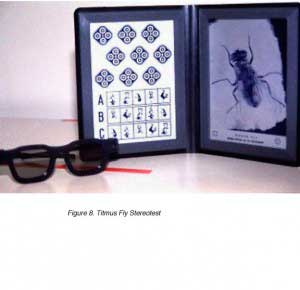 Examples of random-dot stereotests used in the clinic are the Frisby Stereotest, the Randot Stereotest, the Random-dot E Stereotest and the Lang Stereotest. The Frisby Stereotest (figure 9) uses real depth to determine stereoacuity. Three perspex of different thicknesses are used. Four squares of geometric shapes are painted on one side of the perspex. In one of the squares, a circle of these geometric shape is painted on the other side of the perspex. Both the Randot (figure 10) and the Random-dot E uses crossed polarised filters. Disparity is also constructed vectographically. The Randot Stereotest uses modified animals and ring designs with random dot backgrounds to eliminate monocular cues. The Lang Stereotest uses a panographic technique (Fricke and Siderov, 1997) to present disparity, therefore, no filters are required. Patients are required to identify pictures on the Lang Stereotest. The Lang II Stereotest has a monocularly visible shape on it (figure 11). 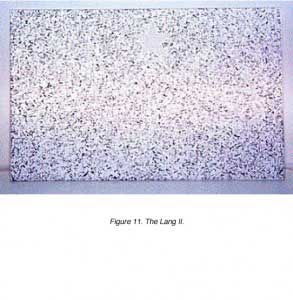 All the tests provides a measure of stereoacuity by asking the patient to identify the correct target that has stereoscoptic depth (target with disparity). The working distance and interpupillary distance will need to be taken into consideration when calculating stereoacuity. Patients with disturbed binocular vision or different refractive error in one eye, will perform poorly on depth discrimination tests.

We like to thank Tim Fricke for providing Figures 8-11. 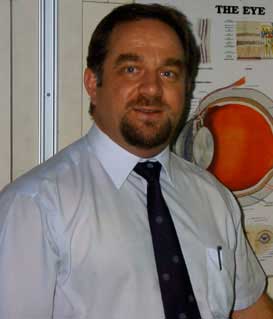 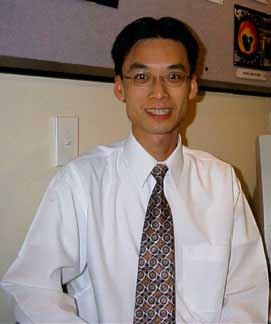